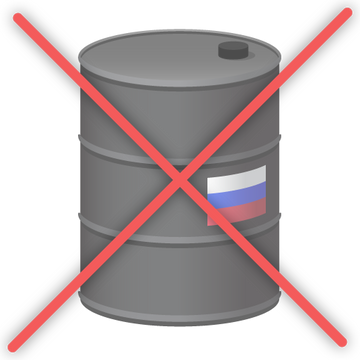 Europe is giving up 90 percent of its Russian oil imports. Will Russia’s economy survive?

On May 31, after a month and a half of negotiations, the EU announced its decision to impose a partial embargo on Russian oil. The embargo’s main purpose is to cut off “a huge source of financing for [Russia’s] war machine.”

In reaction to the announcement, global oil prices continued to rise. Since the beginning of the year, oil prices have risen by 58 percent; in the four days leading up to the decision’s announcement alone, they rose more than 7 percent.

Does that mean European countries will stop buying Russian oil?

Yes, but not right away and not completely.

Russian oil brought by sea to EU countries will be fully banned six months after the embargo is imposed. Oil products will be banned in eight. Sea transport is currently the main means of delivering Russian oil to Europe, accounting for 75 percent of Russian oil exports to the EU.

Bulgaria received permission to delay the embargo on sea shipments until the end of 2024. No deadline has been set for Hungary, the Czech Republic, and Slovakia, but if Hungary, the embargo’s main opponent, delays the negotiations process, the European Commission is prepared to force it to join the sanctions by implementing prohibitive duties.

By the end of the year, when Germany and Poland stop purchasing pipeline oil, the embargo will cover 90 percent of Russian oil imports to the EU.

How much oil was Europe importing from Russia?

In January 2022, Europe imported a little over 4 million barrels of Russian oil and oil products per day. By May, however, that figure had fallen to about 3 million barrels per day due to voluntary refusals from companies and decisions made by individual governments. Hungary, Slovakia, the Czech Republic, and Bulgaria, all of which will be excluded from the embargo, accounted for only 0.31 million barrels a day, or 8 percent of the total supply to Europe, in May.

Will Russia really suffer due to the embargo?

Yes, but not immediately. The embargo’s impact will grow over time.

Oil and gas revenue is Russia’s largest income source. Despite numerous statements from the authorities, the country didn’t manage to kick its “oil addiction” by the time the sanctions war with the West began. In 2021, energy accounted for 49 percent of all export earnings ($243.8 billion), with oil and gas revenue accounting for 36 percent of the federal budget.

In 2022, the budget’s reliance on energy exports has only grown, with oil and gas revenue growing due to high oil prices, despite Urals oil being cheaper than Brent crude by 30-35 dollars per barrel to account for sanctions risks.

Meanwhile, Russia’s revenue from other sources is falling. In April, oil and gas export revenues reached 1.8 trillion rubles ($29 billion; doubling, in annual terms) from 1.2 trillion rubles ($19.5 billion) in March, with their share of the federal budget increasing to 63 percent.

Does Russia depend more on gas or on oil?

How much will Russia ultimately lose?

We still don’t have official projections of how much Russia will lose; the Kremlin and the government haven’t yet commented on the historic ban. However, there have been several unofficial estimates:

You mentioned oil prices have gone up. Shouldn’t that compensate for Russia’s losses?

Yes, but not forever.

The hit the Russian budget took in 2022, which was widely predicted even before this embargo, will be softened by the inevitable rise in global prices that will follow the exit from the market of a large portion of Russia’s oil. Oil prices responded to the news by continuing to increase: on May 31, Brent’s price was over 120 dollars per barrel — more than 7 percent higher than four days earlier.

The average price of Russian oil in 2022 so far is $83.5 per barrel (compared to an average of $61.6 per barrel during the same period in 2021). Russia’s federal government, meanwhile, budgeted for an average oil price of $44.2 per barrel.

The return of demand after quarantine restrictions in Shanghai are lifted and the summer tourist season begins will drive prices even higher. This bodes well for the Russian budget, which still has a chance of closing out 2022 with slightly higher oil and gas revenues than the previous year.

In 2023, however, the scale of the losses will depend on how quickly Russia is able to redirect its exports to China, India, and other Asian countries (for example, Pakistan, Malaysia, Indonesia, and Vietnam).

Technological isolation remains a threat for Russia as well: international contractors won’t be able to implement complex projects such as extracting oil from hard-to-recover reserves. In the absence of investments and foreign technology, drilling activity will decrease, and oil production may drop as much as 17% by the end of 2022.

Will Russia be able to redirect its oil supply to Asia?

Asia will at least partially save Russia from the loss of its key export market.

The main alternatives to Europe are India and China. Russia has already begun reversing its trade flows to those partners: in April, Russia supplied 0.63 million barrels per day to India, compared to the 0.27 million barrels per day it sent in March (and it sent almost nothing in February). Chinese independent producers have also begun ramping up their purchases, importing 20 percent more in April than in March.

But according to an estimate from the analytics company Rystad Energy, even in the best case scenario, Russia will only be able to find buyers for 1 million barrels per day — about a third of what it’s losing due to the embargo (2.7 million barrels per day). India and China have other suppliers in the Middle East, and they can’t just break those contracts on a whim — not that they'd even want to, given the high sanctions risks Russian poses under the current circumstances, according to Energy Intelligence New York Bureau Chief John van Schaik.

Even if Russia manages to redirect a significant share of its lost exports to Asia, savvy local buyers will demand major discounts. In early May, for example, Indian buyers demanded to be charged less than $70, citing logistics costs and sanctions risks.

Another factor that threatens to restrain the growth of Russian exports to Asia is the ban on ship insurance, which could pose problems with transporting oil on tankers. That’s an important detail of the embargo: in order to undermine Russia’s efforts to redirect its exports to Asia, the EU and Great Britain have agreed on a ban (to come into force in six months) on insurance for tankers delivering Russian gas anywhere in the world. Transporting oil by sea requires insurance against spill as well as coverage of each individual ship. Without insurance, carriers will simply opt out of transporting Russian oil to avoid the risk.

Additionally, most of the companies providing insurance to the global oil trade are European. Between February 24 and March 22, more than 70% of the oil shipped from Russian ports through the Baltic and Black Seas was carried by ships belonging to EU countries, the U.S., and Great Britain. If these tankers are unable to transport Russian oil, Russia will have to enlist Asian companies, which will raise transportation costs.

There are also infrastructure limitations. The main pipeline connecting Russia and China, the Eastern Siberia–Pacific Ocean pipeline, can only increase its circulation by 300,000 barrel per day. Vladimir Putin has already instructed the government to increase energy export infrastructure to Asia, including by constructing new oil and gas pipelines from Siberia, as well as by developing the Northern Sea Route and a shipping passage along the Arctic coast.

Is there any way for Russia to work around the embargo?

Getting around the embargo will be difficult since Russia’s oil flow will be subject to increased scrutiny. But there are loopholes.

For example, Russia can use intermediaries to mask the country of origin of crude oil and petroleum products by mixing them with oil from other countries and giving the mixture a new name. This is an expensive process, since traders demand high discounts for the risks they're taking by circumventing sanctions.

Another sign that suppliers are seeking to dodge sanctions is the huge increase in tankers carrying Russian oil that have turned off their tracking devices in recent months.

Monitoring potential embargo evasions won’t be easy. For example, oil from Kazakh deposits being exported from the Novorossiysk Port could easily be mixed with Russian oil.

Will Europe suffer due to the embargo?

Russian oil makes up almost 40 percent of Europe’s total oil imports. Europeans will pay for the embargo with a spike in inflation and an increase in energy poverty — that’s the price of helping Ukraine.

In annual terms, price growth has already reached 8.1 percent, a record high from the EU, while lagging countries will now be forced to compete with wealthier ones for oil, as well as for gasoline and diesel fuel. According to a prediction from the International Energy Agency, by the middle of the summer, the European motor fuel market may experience a shortage and spike a crisis that surpasses that of the 1970s in scale.

Freedom from dependence on Russian export oil will be a long and costly process for both the EU and the entire world. Transitioning to the more expensive Brent oil will cost the EU at least $2 billion per month.

What about Russian gas? Why did they decide not to give it up?

The EU also intends to curtail its dependence on Russian gas, but it’s unable to give it up as quickly as oil.

Gas from Russia is critically important for the region: in 2021, EU countries purchased 115 billion cubic meters of it, making it 45% of Europe’s total imported gas and about 40% of its gas consumption. Nonetheless, experts from the International Energy Agency have already developed a plan to reduce Europe’s Russian gas imports to one third of what they are now, to 55 billion cubic meters per year.

Is it possible that the embargo will force Russia to end the war?

It doesn’t look like it — at least in the near term.

Excluding borrowings, Russia’s oil reserves had reached about 8 trillion rubles ($130 billion) on May 1. According to an estimate from an economist at a major Russian analysis center who asked for anonymity, that’s enough money to cover the country’s military budget and mitigate other spending decreases.

How long this will be true depends on how quickly military expenses increase. In April, Russia’s budget expenses earmarked “ national defense” increase by a factor of 2.5, or about 130 percent (630 billion rubles/$10.3 billion versus 275 billion rubles/$4.5 billion in April 2021). These funds finance the cost of the armed forces, mobilization training, nuclear weapons, and other expenses. Russia thus spent about 21 billion rubles ($343 million) a day on its military in April.